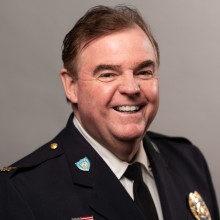 Chief Russ Hamill joined the Laurel Police Department in June of 2019.  He is a life-long resident of Montgomery County  and previously served as the Acting Chief of Police for the Montgomery County Police Department where he has worked for the last 32 years. Prior to his appointment as the Acting Chief, he served as Chief of the Management Services Bureau where he supervised the Management and Budget processes, Personnel Division, Legal and Labor Division, Policy and Planning Division, Information Technology Division, Training and Education Division, and the Emergency Communications Center.  As he moved up through the police department ranks in Montgomery County, Chief Hamill served in numerous positions including the Chief of the Investigative Services Bureau, Commander of the 2nd District (Bethesda), Director of the Criminal Investigations Division, Deputy Director of the Special Investigations Division, Deputy Commander of the 1st District, to name a few.

Chief Hamill is married and has five children.

“I am humbled by this amazing opportunity to serve the Laurel community, the women and men of the Laurel Police Department and the other members of our city team. I truly appreciate the confidence in me placed by Mayor Moe and the City Council. I look forward to all of us working together in helping to make Laurel an even better place to live, visit and flourish,” Chief Hamill said.

Our agency has been on the cutting edge of new policing technologies and strategies. We have embraced officer worn body cameras for years and our program has served as a model for agencies nationwide and in fact has received world-wide media attention. We have outfitted cruisers with AED units to help save lives and we’ve introduced new comprehensive training concepts covering incidents from active shooter scenarios to dealing with mentally ill persons.

Partnerships with the community are vital to keeping Laurel safe. There is added emphasis on community policing initiatives and a Chief’s Citizen Advisory Board to provide valuable feedback and suggestions from the citizens. Also, during construction of our new state of the art police station,  we pushed to add the Partnership Activity Center to strengthen our bond with the community through a shared space for activities. We’ve also taken to new avenues to communicate with and relay important messages to our service area, including Facebook, Twitter, and Nextdoor.

Laurel is also a thriving business town, and we’ve seen an increase in new development recently such as the  Towne Centre at Laurel. Our police officers know how important it is to create a safe environment for residents and visitors who visit local eateries and shops. So from stepping up movie theatre security to conducting focused patrols and security surveys, we regularly collaborate with business leaders, school principals, and members of the clergy to make sure Laurel remains a premier destination for work, play, and live.

The Laurel Police Department is committed to providing the highest quality of law enforcement service to the City of Laurel citizens by aggressive Crime Prevention and vigorously pursuing and arresting criminals.