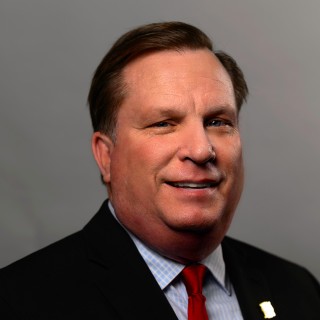 Mayor Moe retired from the State of Maryland on January 1, 2018 with 31 ½ years of service. Mayor Moe served in the Maryland Transit Administration Police Force from 2003 to 2007 as a Special Assistant to the Police Chief and as Maryland’s Assistant Secretary of State from 1999 until 2003. Mayor Moe has also been appointed to serve on the Governor's Emergency Management Advisory Council/State Emergency Response Commission and the State of Maryland Interoperability Governance Committee. After serving for ten years on the Maryland Municipal League's Board of Directors, Mayor Moe was elected MML President in 2009.

Mayor Moe has lived in Prince George's County, Maryland since 1959. Educated in the Prince George's County school system, he graduated from Laurel Senior High School in 1977. Having lived in the City of Laurel for over twenty-five years, Mayor Moe began his public service to the community when he joined the Laurel Volunteer Fire Department in April 1976. Mayor Moe's involvement continued with the City when then Mayor Robert J. DiPietro appointed him to serve on the City of Laurel's July 4th Committee. He was instrumental in starting the first Winter Holiday Celebration Parade, which has continued to this day. Since that appointment, he has attended and actively participated and chaired many public service oriented committees in and around the City of Laurel.

Mayor Moe is a past President and past Fire Chief of the Laurel Volunteer Fire Department. He was the youngest member ever elected to the Office of President in 1983. In 1986, he was elected President of the Prince George's County Volunteer Fire and Rescue Association, again the youngest President elected to that position and was elected to a second successive term. Mayor Moe served on the Maryland State Firemen's Association Executive Committee for several years and one year as its chair. He continues to serve the Laurel Volunteer Fire Department and community by actively attending meetings, is active in emergency operations, and continues to satisfy the Department requirements for active members.

As Councilman, Mayor Moe represented the City Council on the Laurel Planning Commission, Laurel Cable TV Arbitration Board and was the Chair of the Public Safety Committee. He served 12 years on the Maryland Municipal League’s Board of Directors. He has twice been appointed to the Maryland Municipal League's Legislative Committee and twice to the Convention Planning Committee, serving as the Chair of the Committee in 1999. He also has served on various State, County and local committees and task forces. Mr. Moe is a former member of the Northern Chapter of the American Heart Association. He is a member of the First United Methodist Church of Laurel.

During his tenure on the Laurel City Council, Mayor Moe successfully sponsored legislation to establish a juvenile curfew while protecting the rights of citizens. He continues to support Public Safety groups and their goals. Mayor Moe has updated and sponsored legislation to the City's Ethics laws, Historical District Guidelines, Adequate Public Facilities laws, and the City's elections laws.  Mayor Moe has assigned City Department Heads to represent the City on matters of regional importance within their specific specialty, background, and training.  In addition, he has worked tirelessly to insist upon the right balance of growth and quality development that will increase and protect the City's revenues while minimizing the tax burden, and preserving the quality of life that the citizens of Laurel enjoy.

As Mayor, the Moe Administration has established the Revitalization Overlay Program that has allowed the City to redevelop from within its corporate limits. Most notably, the redevelopment of the former Laurel Mall into the new Towne Centre at Laurel. The new Towne Centre development replaced the old decrepit indoor shopping area known as Laurel Mall. Towne Centre is an open air, walkable center that includes a variety of stores and dining options for patrons to enjoy.  In addition, the site has a Regal Movie theater, a Harris Teeter and a new residential component. Additionally, the Towne Centre at Laurel features free concerts, holiday events, etc. that benefit the community.  His administration has worked to enhance the appearance of Main Street with streetscape enhancements and lighting.

In 2008, the Moe Administration created the City’s Moderately Priced Dwelling Units and Work Force Dwelling Units Programs. The Programs were revamped and renamed to the Affordable Housing Program (Program) in 2016.  The Program requires any new multi-family construction consisting of 50 or more units must have six (6) percent of the housing stock for persons of low and moderate income.

Mayor Moe and his Administration worked to create the Main Street Economic Development Program established in 2012 and later amended in 2016, to provide grants for business and property owners. The Main Street Relocation Grant awards participant’s up-to $10,000 to relocate new or existing business to the Main Street Area. The Retail Storefront Façade Improvement Program grants participant’s up-to $5,000 for approved façade renovations to commercial properties. The Program has been beneficial for a variety of businesses to locate to the City. Furthermore, it provides incentives for property owners to maintain the aesthetics of their property.

The Moe Administration established the Economic Development Commercial Corridor Program in 2016. The purpose of the Program is to support City businesses and serve as a means for business growth in the City of Laurel resulting in increased job opportunities, an expanded tax base and an improved quality of life.  The target areas for the Program are the following Revitalization Overlay Areas along US Route 1: RO-1- City Center, RO-2-Highway Corridor and RO-3-Route One Historic District and Gateway Approaches.

Mayor Moe worked to create the position of Emergency Services Director to better serve and coordinate efforts before, during and after an emergency. The creation of a local Emergency Operations Center has been established and the Citizens Emergency Response Team was developed. Emergency Services have been improved and enhanced. Many new positions have been added within the Laurel Police Department as well as a new command structure to better serve the department and its citizens.

Under the Moe Administration, the employee pay plan has been enhanced to remain competitive with area employers and technology enhancements have been made to take the City forward to providing e-government services. The Moe Administration has established the Laurel Civic Improvement Committee to promote a more attractive appearance to the City streets. In 2007 the Moe Administration recognized the cost savings by bringing the recycling program "in house" under the direction of the Department of Public Works. In 2011, Mayor Moe established the Mayor's Summer Jobs Program that provides the opportunity for youth residents ages 14-16 to work in City Departments for 7 weeks during the summer. The program has been very successful and the youth have gained real life work experience while learning about their local government.  Mayor Moe also created the Mayor’s Annual Open House which showcases City services and City volunteer organizations. In 2017, Mayor Moe, with the support of the Laurel City Council, established the City’s first Arts Council to encourage and invest in the visual arts, performing arts and art education programs.

Partnerships with area local governments and Fort Meade have been established for better and strategic communications and planning. In an effort to halt the complete closing of the Laurel Regional Hospital in 2015, Mayor Moe co-chaired the Laurel Strategic Planning Work Group. The work group included an 11-member executive committee and 7 subcommittees designed to focus on critical issues such as emergency medical care, the expansion of services that addressed the specific health needs of the community and the hospital workforce.

In 2019, Mayor Moe directed the implementation of the City's Organics Recycling Program in an effort to reduce wasted food and turn it into a valuable and environmentally safe resource.

In 1987 and 1998, Mayor Moe was recognized among the "Outstanding Young Men of America". He was inducted into the Hall of Fame for the Prince George's County Volunteer Fire and Rescue Association. He was honored to have been selected the Laurel Volunteer Fire Department's Firefighter of the Year four times. He is the recipient of the Albin Fairall Award and the Norris Beard Award. Mayor Moe was honored by the Maryland Municipal League (MML) in 2015 with the Lifetime Achievement Award that recognizes an elected or appointed city/town official who has a strong record of service to the Maryland Municipal League and has demonstrated outstanding service to Maryland municipal government. He was also inducted into the MML Hall of Fame in 2015. He has received countless awards for his efforts to the State, County and community.

Office of the Mayor

The Mayor is the Chief Executive of the City, with all the powers necessary to secure the enforcement of all ordinances and resolutions passed by the City Council.