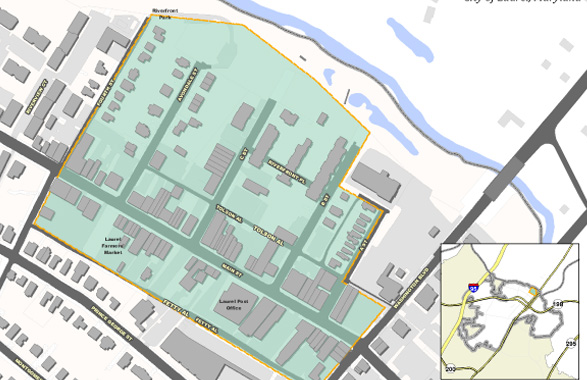 The purpose of the Arts and Entertainment District is to provide an active, pedestrian oriented area with its character set by residential, commercial, arts and entertainment uses.  The scale of the areas comes from its existing historic structure.  The enhancement and preservation of those features within the area that contribute to the area’s focus as a pedestrian arts and entertainment center is encouraged.  The overlay offers opportunities for more intense redevelopment of housing, businesses, and workplaces to complement the Main Street business area.  Improvements should highlight the historic nature of the area as well as expand the cultural opportunities.  Redevelopment shall extend positive characteristics of the Main Street business area such as the pattern of blocks, pedestrian-oriented street fronts, and outdoor spaces.  New construction shall maintain the business area’s existing character.

The Department of Economic and Community Development maintains and oversees the built environment within the City of Laurel. The department is responsible for zoning compliance, subdivision and development review, historic preservation review, economic development, affordable housing, and implementation of the City’s Master Plan. These activities are intended to improve the life quality in the City. Department staff strive to provide these services in a timely and efficient manner while promoting high-quality development which is compliant with State of Maryland regulations and statutes.