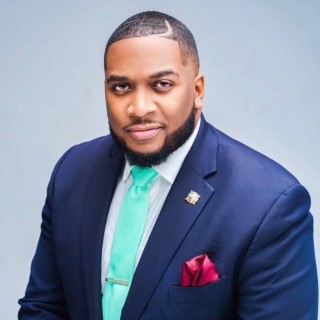 Brencis D. Smith was elected to his second term on the Laurel City Council on Tuesday, November 2, 2021. He was sworn-in to office on Monday, November 22, 2021, and was unanimously elected by his colleagues to serve as the Council President that same night. President Smith previously served on the City’s Education Advisory Committee last term. President Smith previously ran for State Delegate in 2018. After unsuccessfully winning the primary, he was appointed to the city’s Homelessness task force created by Mayor Craig Moe in 2019, where he served as the Co-Vice Chair.

President Smith was born and raised in Hartford, Connecticut. He came to Maryland in 2012 to continue his journey in higher education after his father lost his battle with gastrointestinal cancer. President Smith’s entrance into the political arena was fortified through his early years of observing his father execute and deliver in his position as Assistant Town Clerk of the city of Hartford. He resided in Laurel while finishing school and fell in love with the essence of the city. He attended Washington Adventist University in Takoma Park, Maryland where he graduated with a bachelor’s degree in Organizational Management. President Smith currently works as a Financial Analyst for an engineering company in the transportation industry located in Washington, DC. President Smith has worked in Finance and Accounting over the past 10 years. President Smith is 32 and brings a fresh wave of new energy and ideas. He has hosted several events this past year and is always looking for new ways to engage with the community. President Smith took to the streets to protest social justice along with many Americans of different backgrounds the summer of 2020. On June 19th, 2021, President Smith hosted the largest Juneteenth celebration the city has ever seen. In result, the city has formed a Juneteenth committee to officially celebrate the holiday annually. President Smith still plans on keeping his promise from his first term and hosting the first Afro-Caribbean Festival in the City of Laurel, like the West Indian Day Parade/Festival that takes place in his hometown of Hartford, Connecticut. President Smith is a father, Christian and strong advocate for equality and unity.

President Smith served as the Director for the youth choir of his church at the Capitol Hill Seventh-Day Adventist church in Washington, DC. He also served as Minister of Music, Choir Director and musician for Faith SDA, his home church, located in Hartford, Connecticut. President Smith is known for his smooth harmonies and enjoys partaking in acapella performances. While in Connecticut he also assisted with the Golden Eagles Pathfinder Club and Drum Corp. You can usually find President Smith out and about in the city making himself very accessible to his constituents and neighbors. President Smith’s work is centered around creating a better quality of life, increasing community engagement through neighborhood sponsored events, representing the diverse and unique background of all Laurel citizens.