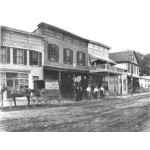 The year 1870 marked the beginning of Laurel's incorporation as a town. That is the year the General Assembly of Maryland passed an act to "put Laurel on its own," so to speak. The Act was signed by Governor Oden Bowie on April 4, 1870.

Laurel, however, had its beginnings long before the General Assembly of Maryland bestowed its charter. Located in the apex of Prince George's County, 28 miles distant from its county seat, Laurel has progressed without very much assistance from county sources ever since it has been "on its own," so capable has it been of solving its own problems. In spite of its rise near the turn of the century as the most important city in Prince George's County, a status it is once again approaching, it has often been referred to as "an orphan" of the county. Its existence and operation and complete independence as a corporate entity, one time led the late Capt. Vinton D. Cockey, a former county commissioner and well-known land surveyor and engineer, to promote the idea that "Laurel should be carved out of Prince George's County and become a county of its own."

Many former and present residents have contributed to the content of this document. There may be areas which lack depth of coverage. There may be names and dates and places omitted. Fading memories, inadequate chronicling of events as they occurred, lack of time for extended research, and limited staff and space we offer as reasons. We have deliberately dealt more with its early history than its recent, for the latter is easily accessible to the inquisitive.
And people make the history of any town. In the case of Laurel, we hope we have peeled away enough patina to bestow pride in her past and faith in her future.

--Gertrude L. Poe
(Reprinted from the 1870 - 1970 Centennial Historical Souvenir Booklet. Much of the information contained in this Web Site is derived from this publication) 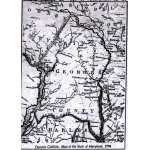 The Story of Laurel is essentially a story of people. As a municipality, it is not old, as Marylanders measure such matters. From the point of view of early settlement, however, it is extremely so. Only a scant generation separated the landing of the Calverts at St. Mary's City in 1634 and the arrival of Richard Snowden. "The Immigrant," to occupy his 10,000 acres stretching westward from South River in northern Anne Arundel County well into what--more than a century later--would be Montgomery. St. Mary's County was erected in 1637. Calvert followed thirteen years later. In the same year Anne Arundel came into being. By 1658 Charles had become a political entity. Not until 1695 did Prince George's take form from a realignment of Calvert and Charles.

Richard Snowden, Friend, came to the friendly shores of Maryland from Wales in 1658 and the fact that his generous grant of land lay almost a hundred miles north of the Calverts' landing place tells something of the character of the early Marylander. Settlement literally raced up the shoreline of navigable rivers and bays and to the credit of the Maryland Colonial a contributing factor was the generally peaceful relationship existing with native Indian tribes. Captain Henry Fleet, trader, explorer, translator extraordinary and tower of strength to the Calverts on their arrival had lived among the Indians for years and known the Potomac intimately up to the head of Tidewater where Georgetown now stands. He counseled the Calverts well and was rewarded in 1635 with West St. Mary's Manor, Maryland's first recorded land grant.

Thanks to the absence of military aggressiveness by the Maryland colonizers a generally peaceful relationship existed. It was, then, a rather peaceful area that awaited Richard Snowden in 1658. We read, here and there, of the changing nature of our Port Tobacco Creeks, the Eastern Branch of the Anacostia River and the silting of the upper reaches of the mighty Patuxent. One may place credence in such speculative recording; Richard Snowden erected his home, not on the bank of the South River where some shoreline was his, but very near the Patuxent, southeast of today's Laurel. In the middle 17th century, access to navigable streams was urgent and necessary. There were no roads of importance, nor would there be for another century. Only the waterways permitted reasonable mobility.

Laurel was not yet, but as successive generations of Snowdens took up the reins of the family fortunes the advent of the other became inevitable. A third Richard Snowden became sole owner of the family's shared iron enterprise and all of his life he was identified as Richard Snowden, "the Iron Master" , or "The Iron Monger". One finds both in the early records. This Richard died in 1763.
Laurel had been settled in the 18th or early 19th century as "Laurel Factory" a designation it retained until June 14, 1875, when it officially took its present name. The Snowdens had very early established an iron works along the Patuxent and then expanded, later, into mills and factories. 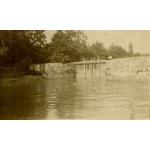 In 1824 Nicholas Snowden established a cotton mill which employed a hundred persons and flourished with typical Snowden success. This was expanded to include a main factory of woolen hats, another turning out blankets and a saw mill. With the death of Snowden on March 8, 1831, business conditions in Laurel deteriorated. The vast Snowden holdings of six thousand acres were divided among the numerous heirs. Dr. and Mrs. Jenkins presented 69 acres of their own portion to Georgetown College in 1849-50. This choice land represents most of Laurel's present day business district.
Horace Capron who had married Louisa Snowden erected the Patuxent Cotton Manufacturing Co. in 1835 with the aid of his brother-in-law, Dr. Jenkins and O.C. Tiffany and Co. Capitalized at more than a quarter million dollars -- a princely sum for those days -- the project thrived for twenty years and gave employment to five hundred townspeople. Tragically, it burned to the ground in 1855, but was rebuilt and continued on until obsolescence necessitated its removal in the mid 1940's. 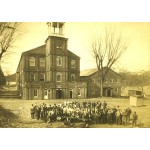 With the construction of its mills, it must be accepted that the first half of the 19th century witnessed a building boom, with some 500 mill workers to be housed. To the credit of some city planner of long ago, lot lines and thoroughfares were established and strictly observed. This can be noted by the few surviving mill houses at the west end of Main Street. We are not told by written town records the nature of Laurel's local government in these early days. Quite likely there was none; the complexities of the times were few as we note our complexities today. When the mills, which represented the chief employment of the community burned in 1855, Laurel sank into a lethargic decline.

In 1870, Laurel left its fledgling status and took on the rights and responsibilities of incorporated government. Maps of the day would designate the wheelwright and the blacksmith as highly important persons in the economy.
The original incorporation stipulated "Commissioners of Laurel" with five elected representatives serving as such. These were :

Mr. Curley was elected President of the first board. It is of interest that his grandson, James P. Curley was a later Mayor and also that Edward Phelps, son of Edward J. held the same office seven times. For twenty years this form of government functioned to the satisfaction of local residents.

In 1890, by act of the Maryland Legislature, Laurel was incorporated a second time by amendment with Mayor and City Council and divided into three wards. Also in 1890, agitation for an electric power plant, privately operated, and extended street paving projects met with success and water and sewer improvements followed shortly after.

In 1937, Postmaster General James H. Farley, in dedicating a new Laurel Post Office, pointed out that just one hundred years earlier in a similar dedication with Edward Snowden as Postmaster, this had been Laurel Factory. Not until June 14, 1875, was the name shortened to Laurel. 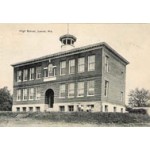 In 1899, on the northeast corner of Montgomery and Eighth Streets, was built the FIRST HIGH SCHOOL IN PRINCE GEORGE'S COUNTY. If ever there was a story of obstacles overcome by one man's determination it is that of Laurel's seven-times Mayor, Edward Phelps, in pursuance of this project. When the low bidder failed to give bond and declined to proceed with the contract, Edward Phelps himself assumed the risk of putting up the school at the low-bid price and lost a thousand dollars of his own money in doing so. As long as this 1899 school building stands, the civic-mindedness of Laurel's Edward Phelps will need no other attestation.