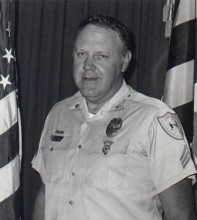 Mayor Craig A. Moe is saddened to announce the recent passing of another Laurel retiree, Laurel Police Sergeant, Wallace Mitchell.

After retiring from the Laurel Police Department, Sgt. Mitchell served as Police Chief for the nearby town of Sykesville in Carroll County for 14 years, where he retired in June of 2001. When asked about his retirement, he said he planned to relax, ride horses and fish with his two granddaughters.

To honor his 25 years of service protecting and serving the City of Laurel and its residents, Mayor Moe has ordered the City flag be lowered through Thursday, September 10, 2020.

Please keep his family in your thoughts and prayers.

*** Funeral arrangements are planned for Thursday, September 10th, at St. Andrew's Episcopal Church located at 11710 Beckford Avenue, Princess Anne, MD 21853. Viewing and condolences will begin at 1200 hours, followed by a service at 1300 hours. Interment to follow at a later date. The Laurel Police Department will be coordinating a multi-agency Color Guard detail, and other Maryland agencies will be involved in various aspects of the service.***