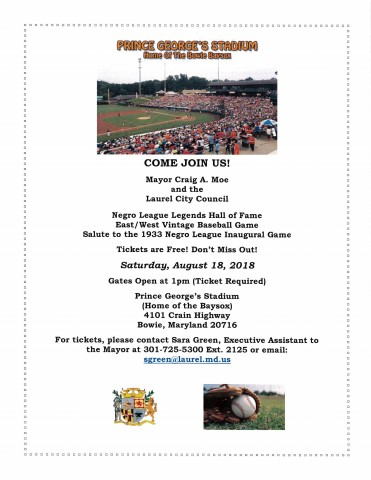 Can you hear the crack of the ball on the bat? Smell the popcorn and hot dogs? Imagine catching the high, infield fly as it drops into the stands? Imagine no more!

Thanks to the generosity of the Negro League Legends Hall of Fame, Mayor Craig A. Moe and the Laurel City Council invite you to the East/West Vintage Baseball game on Saturday, August 18, 2018, at the Prince George’s Stadium, home of the Bowie Baysox!

The Negro League Legends Hall of Fame will be honoring the Inaugural Negro League Game played back in 1933, by having former Major League Baseball players and collegiate players dressed in vintage attire, appropriately representing the diversity of players, who played for the “Love of the Game," in the early to mid 1900s!

Mayor Moe will be among other special guests to take part in the honorary "First Pitch" ceremony on the field.

This is a golden opportunity to salute a wonderful piece of history tied to our great city, so don’t hesitate and get your tickets today!